The Dark Side of Vision

The Dark Side of Vision 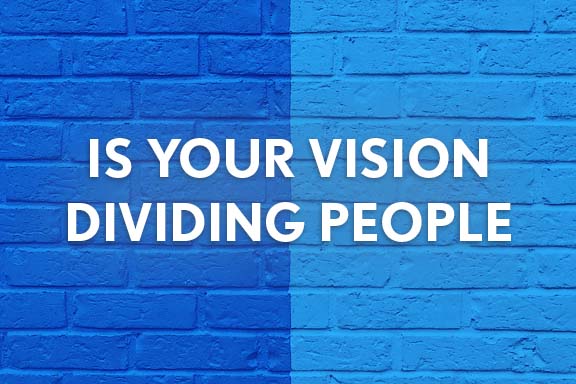 If you've been around the church any amount of time you've probably seen this play out: A leader casts a vision for an event, or a ministry or a season, and before he finishes exhaling the room starts splitting in half. Some (hopefully most!) people are on board, but there are others who resent the idea and either grumble and complain, or leave the organization.

If you've experienced this phenomena in your church, then Paul Alexander has some great wisdom for you on the topic:

The Clearer the Vision the Louder the Critics

Many leaders often naively think that everyone is going to automatically love the vision as much as they do. They strongly and clearly cast the vision, and much to their surprise, they are often met with resistance and criticism. The truth is the clearer you articulate the vision the more criticism you will receive. There are always naysayers both inside and outside the organization. Jesus was criticized to the point it ended up costing His life. If you’re the leader and you’re not prepared for criticism, then be careful how clearly you articulate the vision.

The Clearer the Vision the More People Will Leave You

Vision is not only a rallying cry but also a jumping off point. The clearer the vision is articulated not only will people join you, but people will leave you as well. This happened to Jesus Himself when in John chapter 6 He literally goes from 1,000’s of people following him to by the end of the chapter it’s just the twelve. If you’re the leader and you’re not okay with people leaving you, be careful how clearly you articulate the vision.

As leaders, we need to embrace the truth that not everyone is going to embrace our vision. When (not if) that happens, we have 2 choices: Continue to cast a clear steady vision for the future and face the scrutiny of people, or back down and allow the status quo to maintain. We all know how that ends though.